To These Members and Veterans we give our sincere condolences to Family, Friends, Comrades and Neighbours. Rest in Peace: We Will Remember them. 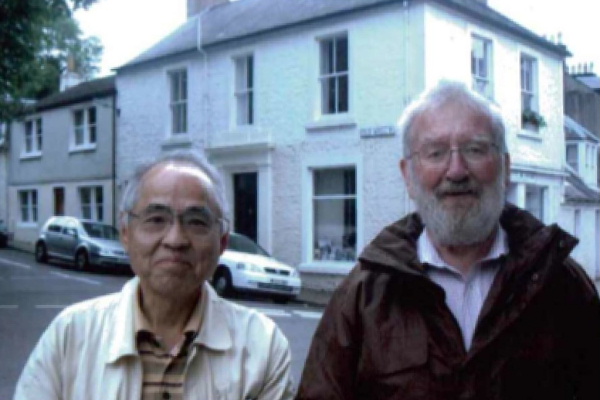 David pictured with a tourist in Moffat

David Richardson died on July 8th, 2013, at Maidstone Infirmary. He was born in Moffat on March 12th,1929 and lived in the town all his life. In 1947, he was called up to do his national service and in 1948, was sent to Palestine where he served as a wireless operator in the Royal Signals, part of the time working in the King David Hotel, Jerusalem.

He worked for most of his life selling animal feed and, when not working, he enjoyed curling, singing and acting and served on various local committees (Moffat Gala, League of Friends, Moffat Hospital, Moffat Show). He was a member of St Mary's UF church where he was Session clerk for 27 years.  After St Mary's closed, he attended St Andrews and sang in both choirs. He was married for almost 56 years and had two daughters and three grandsons.

David was well known in Moffat, not only by the local townsfolk, but also the tourists! David was not afraid to stop them and talk to them or show them the town and its sights. One day, he stopped the visitor in the photograph and took him round the town. A few weeks later, an envelope arrived at David's house with a number of photographs of Moffat, David and the tourist. This picture is one of them. David will be sadly missed by all.